A new day, a new year, a new problem to solve at the farm.  Today it was waking up to a scorcher of a summers day, to find a donkey mum and bub separated from each other.  With mum on one side of the fence and bub on the other, it was lucky I found them before the heat of the day to get some much needed milk into this little fella: 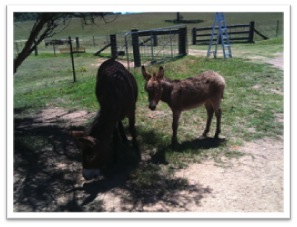 So how long can a donkey foal last if separated from its mum?  That depends on lots of things including its age, the weather, and factors such as predators or dangers to its health.  A newborn foal if separated at birth (as happened to one of ours which rolled under a strandwire fence on birth) could last only a few hours if it can’t get to its mum for milk.  A new born could also be rejected by its mum if its too long – because her ever expanding udder as the milk comes in becomes very sore if the pressure isn’t relieved, resulting in an intervention to milk the Jenny and take some pressure off in order to allow the foal to drink painlessly.

In this case my feeling is that the foal was separated almost 24 hours earlier from its mum when one of them wondered through an open gate and along the fence line without the other.  The good news is that the foal is 3 months old so apart from its mother’s milk it’s also eating grass and probably drinking from the dam on occasions, and has plenty of body fat to sustain it over this period.

So while he was certainly a very thirsty boy, he’s had a couple of good drinks from mum now and is doing perfectly well out by the front gate.  It certainly gave me a bit of a scare though… let’s hope it’s not a sign of things to come in 2011!