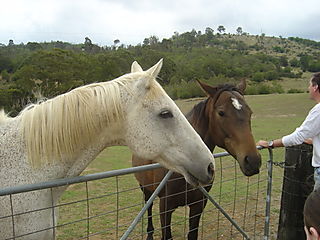 Have you ever had the feeling you’d just taken over someone else’s problem?  That might have been the case when I bought Cricket.  Cricket is a 16hh grey thoroughbred I bought for Ric to come riding with me.  It turns out that Ric – like most blokes I suppose – prefers horsepower to horses.  So Cricket doesn’t get ridden much.  Which is fine by Cricket.

Cricket was an interesting lesson for me in buying and floating a horse.  I’d been liaising by phone and email with his owner and since he wasn’t an expensive acquisition, I decided to buy him sight unseen.  So off I went to Canberrato pick him up.  At the time I didn’t have a float of my own; so I picked up the trusty hire float from Rentquip and set off.

Now buying and floating a horse may not seem like that much of a big deal.  And sometimes it isn’t (like when I bought Jim, for example).  But on this occasion, anything that could have gone wrong did.

Getting there wasn’t too bad and for a change I didn’t get significantly lost.  And riding him was fine too – even if he did bolt off in the complete opposite direction to where I asked him to go at one stage.  But that was where the good news ended.  Because throughout my due diligence process, there was one important question I forgot to ask: does the horse float?  That is, does he travel well.

Yes – you guessed it.  The answer to that question would be a resounding NO!  He refused to enter the float.  So in the end his former owner called in all the horse handling people she knew and with a cast of about a dozen people at hand, Cricket was forced into the float.  Lesson #1: Don’t buy a horse that won’t enter the float.

Getting Cricket into the float took at least an hour, and by the time he was in he was visibly shaking with fear.  Poor guy.  He’s a sensitive fellow too, so I feel especially bad about this.  But he was in the float so off we went.  But little did I know that wasn’t the end of it.  On the almost 3-hour drive home, he spent most of the journey trying to kick his way out of the float!  So by the time we got back to the farm, his legs were bloody and beaten to a pulp!

Lesson #2: Use float boots on nervous horses (a bit like cricket pads that cricketers wear on their shins).So, of course, the vet had to be called out to administer anaesthetic and anti-inflammatory drugs to settle him down.  Luckily we have excellent horse vets in our area.  But this was hardly what I had in mind in buying an old nag as a companion horse on the odd trail ride.  Fortunately, after a couple of months he recovered fully and he’s happy as Larry now.  But far from turning out to be small investment, Cricket’s turned out to be quite the opposite.

Lesson #3: For anything to do with horses, work out your estimated budget then triple it.  That’s the minimum you’ll get away with spending. By time I factored in hiring the float, the fuel for the road trip and vet expenses after he arrived, not to mention the ongoing costs of feed, shoes and tack, Cricket’s definitely cost 3 times as much as I counted on.

None of which is of any concern to Cricket at all.  He’s just happy he ended up at Camp Liability where he lives the life of Riley with his new best friends Jim and Blackie – especially Blackie.