“Why donkeys?” is the usual response when I tell people that I breed donkeys.  Closely followed by “what for?”

The answer to the first question is they are simply fascinating creatures.  For thousands of years donkeys have been companions to humans and they’ve underpinned the economies in the development of nations around the world. 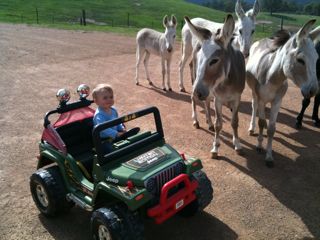 They are extremely interested in the humans they live with – as you can see from this photo – they couldn’t wait to come and check out Ethan’s new Jeep and make sure everything was safe and in order for him.

From a financial perspective they also produce a better yield than cattle do on the farm, which is a bonus, because so many people want to buy donkeys as pets.  Because I also breed small donkeys, they are perfect pets for young children.

On the farm the donkeys are constant companions – they follow me around from paddock to paddock, they keep the grass down around the house and they are also good herd protectors (which the beagles bear the brunt of when they step out of line!)

And of course donkeys – unlike many of the people I’ve worked with in business – actually have an excuse to be asses… but they don’t take it out on everyone else around them!