My Millie has been sick.  Most of you know she’s the alpha in my pack and it’s unusual for her to be struck down with illness.  This is a dog that will go to any length for her passion – chasing kangaroos at the farm! – and on this front she’s a high achiever if I’ve ever seen one.  She can go for 12 hours straight, dashing and darting across the countryside non-stop chasing ‘roos.  None of the other beagles are faster or more determined than her.  So what could bring her down?  Would you believe it was a tiny grass seed?

That’s right, a grass seed – probably no more than 1mm in size – was enough to penetrate her armor.  Somehow it made it’s way into her abdomen, possibly it was breathed into her lungs during one of her adventures or it may have penetrated the skin.  But once inside, it festered away over a period of several months until an abscess the size of half a tennis ball suddenly protruded from her side. 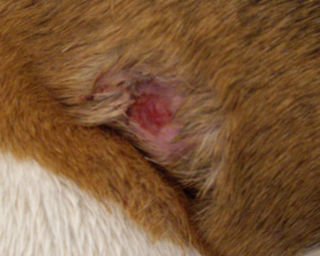 The symptoms first appeared in August and so off we went to the vet.  Millie hates going to the vet and she puts on quite a performance whenever she’s hauled in for examination.  But it was worth it: after a course of antibiotics the lump went away.  Problem solved.  Or was it?

Four months later, and the abscess was back last week.  Bigger and nastier than ever.  Turns out we’d treated the symptoms but the cause was still there, festering away inside of her.  This time the abscess popped before we got back from the farm and sure enough the grass seed made it’s way out.

As you can imagine, it wasn’t particularly pretty.  If you can’t imagine – this is what an abscess looks like when it pops (although this is after a couple of days so it looks pretty clean now).

Good news is now that it’s out, and with another course of antibiotics, it’s finally healing properly.  And it looks like she’s ready and rearing to go on her next adventure already!