With the onset of the warm weather, we’ve been on a bit of a go-slow at the farm.  The beagles think it’s way too hot to be out chasing Roos (thank goodness!) so they’re sleeping the days away waiting for the sun to go down before their energy levels rise (and it’s not even summer yet!) 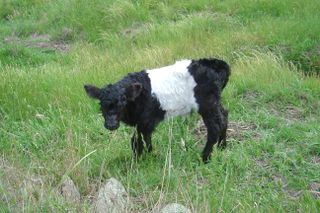 The upside of this is that Ric and I took them on a twilight stroll last night.  I love daylight savings, it’s so pleasant heading out after the heat of the day has subsided to check on all the crew.  So off we went, through the hilly paddock first to check on the donkeys and horses and some of the alpacas.  Then we headed off to check on the sheep and the other herds of donkeys and alpacas, who’ve been flatting with the cows in the front paddock.

In truth I didn’t want to walk the extra leg into the front paddock – I was tired already after covering the first 50 acres but Ric thought it would be a good idea.  Which of course it was, because we discovered this new little guy in there with his mum, Turandot.

Our first calf of the season, and isn’t he handsome?  Perfect white belt and a good size too.  Pity he was a bull instead of a heifer, but at least he’s healthy.  He’s the 7th viable calf born at the farm so his tag will be SC007… guess I’ll have to nick-name him Bond (James Bond)!