Early every morning Ric goes for a walk around the property, checking on the stock and looking for new arrivals.  On this morning, he made an interesting discovery.  Petra had finally given birth – I’d been watching her closely for a couple of weeks as it was her first foal and she was so big she looked like she’d burst!  Only problem was she’d laid down by a strand wire fence to deliver the foal and as the foal slid under the wires, mother and son ended up on opposite sides of the fence to each other. 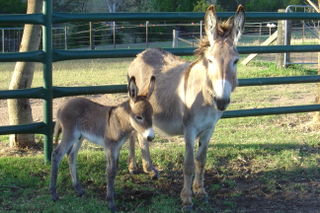 Good news was Ric found the little guy within a few hours of his birth and reunited mother and foal.  Bad news was – although Petra recognised the foal and was certainly being protective of him – she wouldn’t let him drink!

Every time he went near her udder Petra kicked the foal away.  This is a big problem because the babies need the colostrum or first milk from their mothers for the special antibodies and proteins it contains.

Colostrum gives them a head start with their growth and development and it’s pretty rare to be able to bottle raise a baby that hasn’t had it’s mother’s own colostrum.  It’s also a problem because if you can’t get the milk flowing, the mother will dry up and stop producing milk all together.

We tried separating mother and foal from the rest of the herd in the houseyard but Petra wouldn’t have a bar of it.  After an hour or so she still wouldn’t let the little one drink from her.  There was nothing to do but intervene. 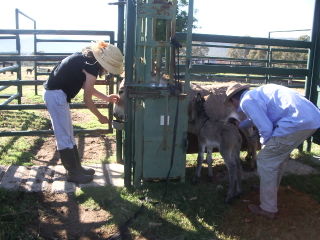 So off we went to the crush where Petra was put in the head lock and her back leg strapped so we could express some of her milk and get the foal’s confidence up to drink without getting kicked away every time.

SUCCESS!  After half an hour in the crush, taking a bit of pressure off Petra’s udder and closing them into the small yard, the little fella started drinking on his own.  Which is fabulous because I have orders piling up for grey donkeys (everyone wants a donkey just like the one in Shrek!) and he is the first one born at the farm.

He’s such a pretty little fella and in honor of Ric’s discovery I’ve called him Richie.  Half a day later and mother and baby they were both happy as pigs in mud… and so were we!