Well 2008 was a successful year of breeding for us in one area only: donkeys!  We ended up with quite a few foals which is a good thing.  Perhaps more than I was ready for, only in that it’s hard to train and handle 8 donkey foals all at once!  In fact my off-farm work prevented me from working all the newborns, so that I had to decide early on which ones I’d keep and work with and focus on these few. 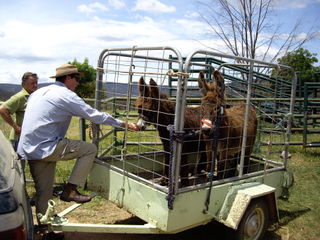 The bad news of course is that eventually you have to say goodbye to the “extras” as they travel off to their new homes.  Which is exactly what happened with these two who were collected from the farm and have now gone to live about 6 hours south of here.

Both were sired by Ted the English Irish jack that I leased from Canyonleigh – he produced some beautiful foals like the fluffy little guy in this shot (his dam is Lulu who isn’t very fluffy and quite Australian looking so the dominant “fluffy genes” must have come from Ted!).

Isn’t he cute?  And so is his little filly who’s gone with him for company.  They’re off to a very donkey friendly farm with an existing herd so I’m sure they’ll settle in very happily!